"Species interactions" is a new feature on iSpot that allows you to record and explore interactions between two different species. For instance, you may see a bird feeding on a particular fruit, a butterfly visiting a flower, or a lichen growing on a tree.

An introduction to the species interactions feature and how to use is available here. Read on for more detail about how to add interactions to iSpot for observations you have made yourself.

Adding a new observation with an interaction

The way to add this to iSpot is:
1. Add your observation of the butterfly in the usual way, via the Add an Observation button. Fill in the details that you need and Save the observation: 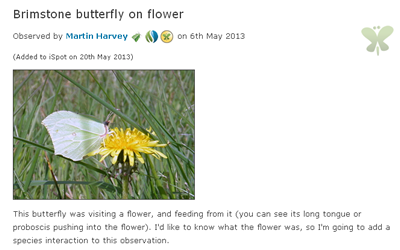 3. Click on "Add an interaction", and you will see a section that allows you to create a second observation that is linked to the observation you created in step 1. Click on the "Please select an option" drop-down list to choose what type of interaction you have seen ("Visiting a flower of", "being eaten by" and so on). If you only have one photo to show both species involved in the interaction, you can tick the small box under "Possible images to re-use" and the same photo will be used for the second observation. If you have separate photos of the two species concerned, then leave this photo box unticked, and you will be able to upload your second photo in the next step. When you are ready, click on "create observation".

For our butterfly example we only have one image, so we will tick the box.

4. Having clicked on "create observation" you are back at the main "Add an observation" page, but you will see a message at the top to remind you that this observation will be linked to observation from step 1.

Also, the date and location have already been filled in - if you have observed an interaction, then both species must have been in the same place, and were probably there at the same time. However, you can change the date if needed, for instance if you go back to photograph a plant at a later date, after the butterfly has flown. Fill in any of the other details that you wish to add. If you don't know the identification of this linked species then as usual you can leave the Scientific and Common name blank (but you do need to say which Group your observation relates to, which in our example will be Plants). When you've filled in all that you need, click on Save.

5. Once saved, your second observation will be displayed, and you'll now be able to see the interaction details on the page:

In this example the flower has not been identified, but hopefully someone else on iSpot will be able to help with that. However, only the observer can add or delete interactions. If a correction is needed you can delete the interaction, and then add a new one as an alternative if required; or if the observation includes more than one interaction you can add additional links.

Adding an interaction to an existing observation

If you have observations already on iSpot that show an interaction, you can add this by finding the observation concerned (e.g. via Your iSpot - Observations - List), and then following the above steps from step 3.

Other things to explore

Back to main Help page.